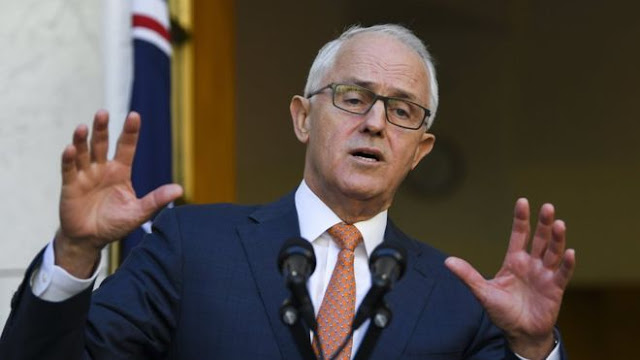 When Australian PM Malcolm Turnbull convinced his party to oust predecessor Tony Abbott in 2015, he used a major opinion poll as one justification.
“We have lost 30 Newspolls in a row. It is clear that the people have made up their mind about Mr Abbott’s leadership,” he said at the time.
Now that benchmark has returned to haunt Mr Turnbull, after his government had its 30th successive loss on Monday.
It has led to scrutiny of Mr Turnbull, and some internet fun at his expense.
The 48-52% result, based on a two-party preferred measure, is a boost for the Labor opposition.
Government ministers have played down the poll, but Mr Abbott said it raised a question.
“It really is something for Malcolm to explain, why it [30 poll losses] applied for me but shouldn’t apply now,” he told Sydney’s 2GB radio station on Monday.
One political commentator said Mr Abbott was keen to “make mischief”, while internet users poked fun.

‘Twas ten minutes pre- #Newspoll,
And as we waited for Ghost
The people were wondering
Was Turnbull now toast?#auspol
4:26 AM – Apr 8, 2018

What does Mr Turnbull say?

The prospect of the prime minister’s 30th Newspoll defeat had been discussed by the Australian media for months.
In recent times, Mr Turnbull acknowledged that his justification in 2015 had become a political distraction.
“I do regret having said it,” he said last year.
Australian politics over the past decade has been marked by a series of leadership coups, with three sitting prime ministers deposed by party rivals.

So is his position unsafe?

Most observers have agreed that Mr Turnbull appears unlikely to face an imminent challenge, despite what one commentator called much “sound and fury” over Monday’s poll.
“There are no serious contenders lining up against him,” said another, News.com.au political editor Malcolm Farr.
“It’s more of an embarrassment than anything else. His position is pretty strong.”
Farr told the BBC that the circumstances of Mr Abbott’s downfall were “entirely different”, largely because he was struggling to prosecute his policies
He added that media outlets “pay a lot of money for these opinion surveys so they’re going to make sure they get their money out of it”.
“It’s possibly one of the strongest reasons why Newspoll number 30 is splashed all over the place,” he said.

Twitter Ads info and privacy
Report
End of Twitter post by @beneltham
Several government ministers have backed Mr Turnbull, saying he will lead the party to the next election due to be held next year.
Former prime minister John Howard urged Mr Turnbull’s conservative Liberal Party to present a united front.
He told the Australian Broadcasting Corporation that the next election was “not unwinnable” for the governmen