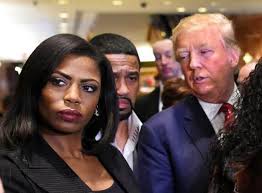 A former adviser to Donald Trump has released what she says is a tape of a phone call from the US president after her dismissal last year.
In the tape played on US TV channel NBC, a voice presumed to be Mr Trump’s expresses surprise at Omarosa Manigault Newman being fired the previous day.
“Nobody even told me about it,” the male voice can be heard saying.
She also released what is said to be a secretly recorded tape of White House chief of staff John Kelly firing her.
In response to a tell-all memoir by Ms Manigault Newman, due to be published this week, Mr Trump called her a “lowlife”, tweeting that “She never made it, never will”.
The White House described her as a “disgruntled” former employee.
President Trump’s lawyer, Rudy Giuliani, says she may have broken the law by recording private conversations at the White House.
Ms Manigault Newman, who knew the president from her days as a star of The Apprentice reality TV show, advised him on African-American issues during the 2016 presidential campaign and went on to become director of communications for the Office of Public Liaison before being fired in December.

Floating in and out

By Tara McKelvey, BBC White House reporter
“Wacky Omarosa” the president calls her. He has a point: her disclosures are hugely entertaining – and embarrassing for the president.
Through her book and TV appearances, she’s exposed private conversations and the inner workings of an unconventional administration, but she hasn’t exposed any serious wrongdoing, and it’s unlikely she will.
She worked in the office of public liaison, focusing on outreach to the African-American community, and didn’t have access to top-level secrets.
I’d often see her float in and out of White House events, leaving them early if they got boring, or showing her friends around the place and inviting them to the White House mess for coffee.
Her revelations are now creating a stir for a reality-TV-star-studded West Wing but this episode’s likely to end soon.

What does the ‘Trump tape’ say?

In the brief excerpt broadcast, the voice said to be the president’s tells Ms Manigault Newman he has seen on the news that she is “thinking of leaving” and asks, “What’s going on?” 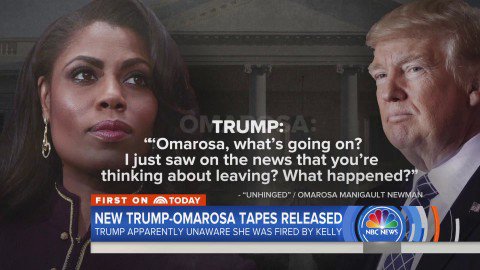 #Breaking: @OMAROSA provides @NBCNews with this exclusive excerpt of a recording of a phone call that she says she received from President Trump the day after White House Chief of Staff John Kelly fired her.
4:07 AM – Aug 13, 2018

Twitter Ads info and privacy
Report
End of Twitter post by @TODAYshow
“General Kelly came to me and said that you guys wanted me to leave,” she replies.
“No… Nobody even told me about it,” the voice replies. “You know they run a big operation but I didn’t know it. I didn’t know that. Damn it. I don’t love you leaving at all.”

How did Manigault Newman lose her job?

Her dismissal was announced on 13 December amid US media reports that she had been fired by Mr Kelly and “escorted out” of the West Wing.
According to the New York Times, she had annoyed colleagues at the White House – but not Mr Trump himself – through her “damn-the-rules” behaviour. “Wacky” and “nasty” were words Mr Trump used to describe her.
In the recording she released of her dismissal conversation, the man assumed to be Mr Kelly, who says he has lawyers present when they meet in the high-security White House Situation Room, speaks of “significant integrity issues” as the reason for firing her.
“It’s come to my attention over the last few months that there’s been some pretty, in my opinion, significant integrity issues related to you,” he says, mentioning her use of government vehicles and “money issues and other things”
There are some serious legal issues that have been violated and you’re open to some legal action that we hope, we think, we can control,” he says at one point.
He also says: “If we make this a friendly departure… you can look at your time here in the White House as a year of service to the nation and then you can go on without any type of difficulty in the future relative to your reputation.”
When Ms Manigault Newman asks if President Trump is aware of what is happening, he brushes the question aside, saying, “Let’s not go down the road. This is non-negotiable discussion.”

How did she defend making the recordings?

She told NBC in an interview that she had “protected” herself “because this is a White House where everybody lies”.
“The president lies to the American people, [White House press secretary] Sarah Huckabee [Sanders] stands in front of the country and lies every single day. You have to have your own back or else you’ll look back and you’ll have 17 knives in your back.”

What do her critics say?

Her decision to make a secret tape inside the Situation Room, used by presidents to make top-level decisions on national security, was sharply condemned by Ms Sanders.
“The very idea a staff member would sneak a recording device into the White House Situation Room shows a blatant disregard for our national security,” she said.
“And then to brag about it on national television further proves the lack of character and integrity of this disgruntled former White House employee.”
“Donald Trump made her,” Mr Giuliani told Fox News. “What kind of ingratitude is this?”
Asked if she had broken the law, he replied: “She’s certainly violating national security regulations, which I think have the force of law.”

What does her book say?

The most explosive allegation in Unhinged is that there is a tape of Mr Trump using the N-word during filming for The Apprentice.
In the book, she does not say she heard him use the word, or that she heard the tape, but in an interview for NPR radio on Sunday, she said she had actually heard the recording. “I heard the tape,” she said.
The White House has said her claims about his language are false.
The book indicates that her view on President Trump has also changed.
She now says the president is a racist, contradicting what she said when she was fired.
Tweeting on Monday, Mr Trump said his former Apprentice co-star had only started to attack him after she lost her job.
He added that he had asked Mr Kelly to try to “work it out”.

Wacky Omarosa, who got fired 3 times on the Apprentice, now got fired for the last time. She never made it, never will. She begged me for a job, tears in her eyes, I said Ok. People in the White House hated her. She was vicious, but not smart. I would rarely see her but heard….
6:27 AM – Aug 13, 2018

…really bad things. Nasty to people & would constantly miss meetings & work. When Gen. Kelly came on board he told me she was a loser & nothing but problems. I told him to try working it out, if possible, because she only said GREAT things about me – until she got fired!
6:50 AM – Aug 13, 2018

President Donald Trump has hit back at China by declaring new higher taxes on imports – raising a mounting exchange war between the two...

Technology LondonTimeNews - February 18, 2020
0
Apple cautions coronavirus will hurt iPhones supplies Apple has cautioned that disturbance in China from the coronavirus will mean incomes missing the mark concerning conjectures. The...

Kabaddi LondonTimeNews - February 17, 2020
0
LAHORE.: Pakistan on Sunday left a mark on the world by turning into the title holders of Kabaddi just because in the wake of...

Newspaper is your news, entertainment, music fashion website. We provide you with the latest breaking news and videos straight from the entertainment industry.
Contact us: londontimenews@gmail.com
© Newspaper WordPress Theme by TagDiv
0shares
MORE STORIES