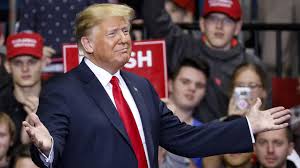 US President Donald Trump has made a last bid for voters to back the Republican party on the eve of the mid-term election.
“Everything we have achieved is at stake tomorrow,” he said during a blitz of three final rallies.
The nationwide vote on Tuesday is being seen as a referendum on his presidency.
His ability to govern in the final two years of his term will hinge upon the outcome.
Americans are going to the polls to vote on all 435 seats in the House, 35 of the 100 Senate seats and dozens of state governors.
With the control of Congress up for grabs, the president has ratcheted up rhetoric on divisive issues in a bid to energise his base.
Former President Barack Obama – on the campaign trail for the Democratic party – said earlier on Monday that “the character of our country is on the ballot”.
On Twitter, he said the vote “might be the most important of our lifetimes”.

What is at stake?

The mid-terms will decide which party will control the two houses of Congress.
If Republicans maintain their hold on the Senate and the House of Representatives, they could build on their agenda and that of President Trump.
But if the Democrats wrest control of one or both chambers, they could stymie or even reverse Mr Trump’s plans.

What you need to know about mid-terms:

Pollsters suggest Democrats may win the 23 seats they need to take over the House of Representatives, and possibly 15 or so extra seats.
However, the Democrats are expected to fall short of the two seats they need to win control of the Senate.
Governors are also being chosen in 36 out of 50 states.

What happens on election day?

After months of campaigning, speculation, and billions of dollars spent on adverts, leaflets and bumper stickers, voters will have their final say on Tuesday.
Democratic candidates for the House of Representative have raised $649m (£500m) from individual donors, more than doubling the $312m tally for the Republicans.
Democrats are hoping to achieve a “mid-term wave” – a sweeping victory that changes the shape of the political map in the US.
Many people have already voted.
Some 34.3 million people have cast early ballots and the real number is probably higher, according to the US Elections Project, a University of Florida-based information source. That figure in 2014 was just 27.5 million.
In Texas, early voting has exceeded the entire turnout in 2014.
However, thunderstorms are forecast for Tuesday along the eastern coast, as well as snowstorms in the Midwest, which could affect turnout.
The first polls close at 18:00 EST (23:00 GMT).

What are the key issues?

During his final campaign rallies in Ohio, Indiana and Missouri, Mr Trump returned to his key campaigning issues, including insisting that Democrats would damage the economy and allow more illegal immigration.
Democratic candidates, meanwhile, have tended to avoid directly confronting the president, focusing instead on so-called “kitchen table” issues, such as healthcare and economic inequality.
The party hopes younger voters, suburban moderates and minorities will be drawn to the polls to react against the president’s rhetoric.
Mr Trump has faced widespread criticism for his divisive language.
On Monday, Facebook, NBC and even the Mr Trump’s favourite network, Fox News, announced they would stop broadcasting a 30-second ad paid for by his campaign, which featured an undocumented Mexican immigrant.
In an interview with ABC on Monday, the president said he wished he had had “a much softer tone” throughout his presidency.
“I feel, to a certain extent, I have no choice, but maybe I do, and maybe I could have been softer from that standpoint.” 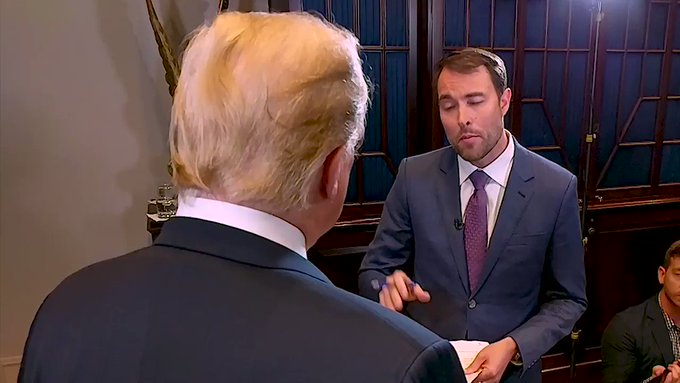 “I’m not sure I want to reveal all of them,” – Pres. Trump when asked what he personally regrets doing during his time in office. However, he does admit one item to me during our 1-on-1 interview. #ElectionEve #ElectionDay #Midterms2018 @realDonaldTrump
2:37 PM – Nov 5, 2018