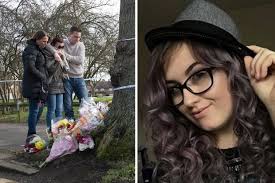 A man has showed up in court accused of the homicide of a 17-year-old young lady who was cut to death in a recreation center in east London.

Jodie Chesney was cut in the back close to a kids‘ play area in Harold Hill, Romford, last Friday.

Manuel Petrovic, 20, was remanded in care in the wake of showing up at Barkingside Magistrates’ Court.

He was charged subsequent to being captured in Leicester.

Jodie was the fifth young person to be cut to death in the capital so far this year.

Her dad Peter drove tributes, depicting his little girl, who was a sharp Scout, as an “incredible young lady” and a “glad nerd”.

Tributes have been left outside the recreation center where she kicked the bucket, and purple strips have been hung crosswise over Harold Hill and Romford.

Subside Chesney paid a passionate tribute to his girl

Understudies and educators at Havering Sixth Form College, where Jodie contemplated, recollected her by wearing her most loved shading on Friday.

Previous schoolmates portrayed her as a “dear baby” and said she was “so lovely – all around”.

Scout pioneer Anna Skipworth said Jodie had “bloomed into a stunning young lady” amid her time with the Scouts.

“She was entertaining, savvy and a delight to work with,” she said.

Bows and strips are in plain view crosswise over Romford in memory of Jodie, whose most loved shading was purple

Jodie was articulated dead after police were called to the recreation center close St Neot’s Road at 21:25 GMT on 1 March.

She was with companions at the season of the assault.

An after death examination gave the reason for her demise as injury and discharge.